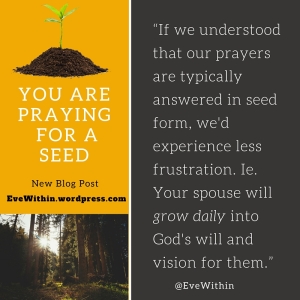 This revelation would have saved me countless heartaches as a bride, friend, daughter, niece, and leader. So often disappointment would flood into my heart as yet another expectation was left unfulfilled.

I would constantly charge God saying, “Lord, my situation looks nothing like you promised me!” Where’s the vision you showed me? Where’s the influence? Where’s the peace?

I would feel as though I got the short end of the stick as I watched others live out the experiences and relationships that I wanted. It didn’t seem fair. I assumed that everyone else received God’s best but every time He gave me something it’d be a work in progress.

He revealed a few key things to me:

1. I was so upset about everything around me being a “work in progress.” I’d apparently completely forgotten that I am one too! I had all this frustration within me over people not being and doing what I thought they should be, and I had a log in my own eye. It never once occurred to me that I should love others as they continue to develop in the same way that I expected others to love me. It never occurred to me that I needed just as much grace (if not more) as they did. It never occurred to me that the sin in my life would be just as hard to deal with as theirs is. A huge portion of my discontentment came from believing: I am fine, they all need to catch up to me. If they lived how I lived, everything would be fine.

2. I expected the vision to be immediate. I would treat the vision as a checklist. I would carry it with me into situations and relationships. I would compare the person or circumstance before me to the vision and complain about the disparity. I just noticed a new revelation about waiting on God while reflecting on Genesis.

When Abram was ninety-nine years old, the lord appeared to him and said, “I am El-Shaddai—‘God Almighty.’ Serve me faithfully and live a blameless life. But God replied, “No—Sarah, your wife, will give birth to a son for you. You will name him Isaac, and I will confirm my covenant with him and his descendants as an everlasting covenant. “This is my covenant with you: I will make you the father of a multitude of nations! Genesis 17:1,19

It happened! (Of Course)

The lord kept his word and did for Sarah exactly what he had promised. She became pregnant, and she gave birth to a son for Abraham in his old age. This happened at just the time God had said it would. Genesis 21:1-2

Her and Abraham eventually had many descendants but it’s not because they adopted a grown man named Isaac who was married with a child on the way. God required that they go through the process.

God requires all of us to endure through the process. No one is exempt.

Sarah and Abraham had a seed of faith and eventually a seed of hope. Their story has many more details but the point is don’t be surprised if you pray and find out there’s more work to be done. God does development through processes and storms. No one but Jesus has or will be born without sin.

When you pray, know that you are praying for a seed. Don’t resent the process; come ready with your water and plow. Come ready to partner with God to see His visions for you come to life one by one. Embrace the journey today!